The first and only whiskey of its kind, The Taoscán is the world’s first Port & Chestnut finished whiskey; a unique blend of barrels brought together in perfect harmony. Restoring Irish whiskey to its rightful place as a global leader takes a whiskey of extraordinary character; The Taoscán is that whiskey. 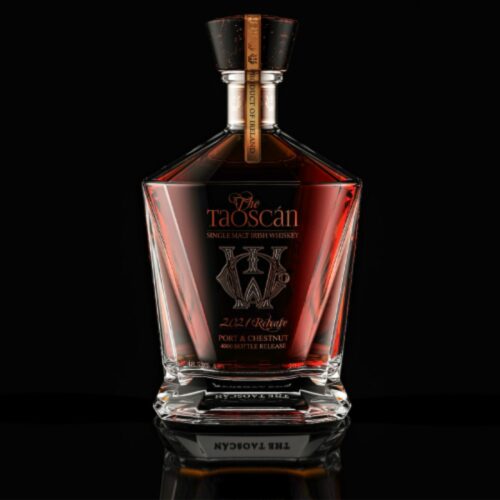 There is no whiskey on earth like The Taoscán. While its formative years in American Oak Bourbon casks and Sherry Oloroso butts imparted vanilla, cedar, oaked musk and notes of rich maple syrup, caramelised figs and juicy raisins, it is the finishing period that delivered a whiskey of era-defining complexity and flavour.

The Taoscán could have been released after its time in American Oak and Sherry Oloroso as a great whiskey. But epitomising our willingness to push boundaries, it was then split across many barrels for two years. Through experimentation and a honed appreciation for flavour, a skilfully balanced blend of the whiskey’s time in Virgin French Chestnut and Tawny Port casks delivered a whiskey of groundbreaking complexity and innovation. The Taoscán is the world’s first Tawny Port and French Chestnut single malt whiskey. 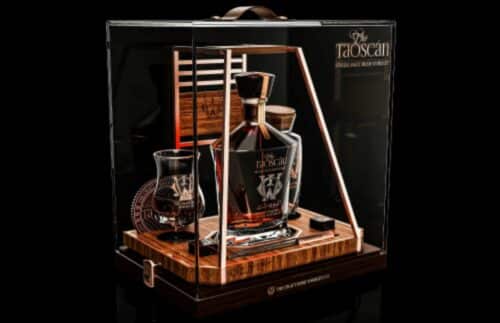 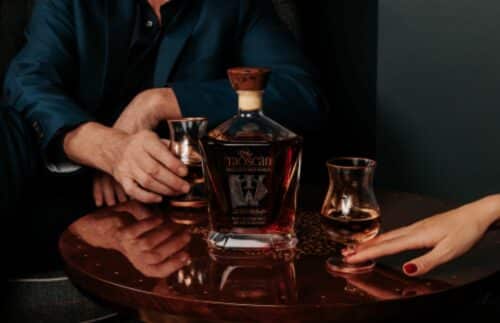 Most would refer to a measure of whiskey as a dram. But travel back in time just over a hundred years and it would be a taoscán you’d order at the bar. Irish whiskey was the global leader, its reputation for skilful crafting and superior quality famed around the world. With 84% of all whiskey sold globally in the 19th-century originating in Ireland, its reach was unrivalled.

But a century of turmoil, conflict, trade wars and political wrangling saw its fortunes falter. The Craft Irish Whiskey Co. is on a mission to restore Irish whiskey to its rightful place as the source of the finest whiskeys in the world. By resurrecting the art of whiskey-making that had been pushed to one side by the rise of blends and mass production, but adding scientific awareness, we’re lifting the craft to new heights. 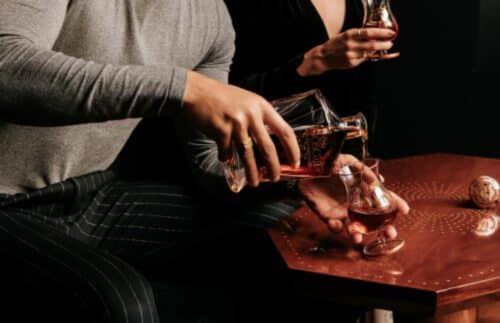 To reinstate a global star takes a whiskey crafted with a respect for the art of the old whiskey masters; standing on the shoulders of our forefathers we see further. But to elevate that craft and bring it into the 21st-century takes science, experimentation and a willingness to question conventional wisdom.

For its final two years, The Taoscán was split across a treasure trove of barrels; from Chestnut, Cherry and Mulberry to Sauternes, Amarone, Banyuls, Port and Riversaults. After two years soaking in the rich notes of these barrels, the tasting began. The whiskeys finished in French Chestnut and Tawny Port were found to have reached their world-beating flavour profiles whilst the others were left to continue their journey. Both could have been released separately as pure expressions of their time in each cask. But blended together in a carefully considered balance, their flavours are undeniably complex, drawing on their separate paths and coming together in a dynamic harmony of flavour and aroma to create the world’s first-ever Tawny Port and French Chestnut whiskey.

Honouring the skilled art of the old master blenders, but adding 21st-century science has created a single malt destined to restore Irish whiskey’s reputation for mellow smoothness and intricate layering of flavour. The Taoscán epitomises the ingenuity and appreciation for wood that saw it win Silver at the World Whiskies Awards, only losing out to our own The Devil’s Keep which was crowned Best Single Malt in Ireland under the no age statement category. 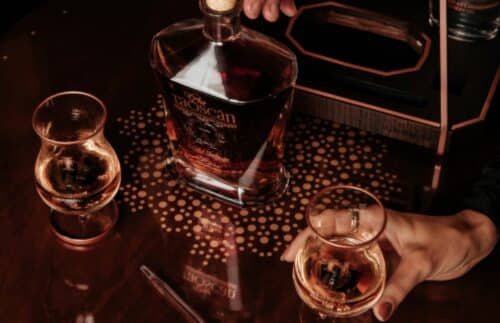 For the man or woman in your life who has everything, The Taoscán is a one-of-a-kind. From the exquisite surrounds conceived by an award-winning designer to the unique whiskey finished in Tawny Port and French Chestnut casks, The Taoscán is a gift of incomparable thought and beauty.

The joy of that first glimpse of the leather handle and the copper stems as they unwrap the skilfully designed stand will only be surpassed by the first sip. For the connoisseur, The Taoscán is a truly unique addition to their collection. 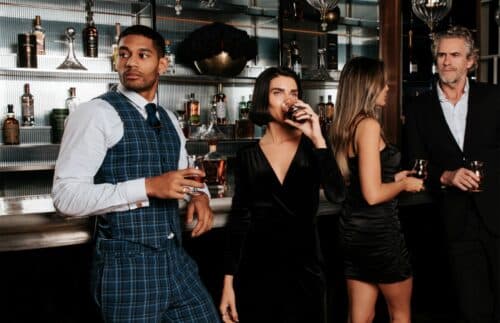 AN INVESTMENT IN AN AWARD-WINNING FUTURE

With only 4,000 released; 3,000 for bars and restaurants and just 1,000 being made available to the public as the Collector’s Edition, with the majority destined to be consumed, The Taoscán is also a potential investment. A first-of-its-kind, creatively crafted debut that showcases the skill and ingenuity of a company that has won praise and accolades across the board. From the Best Single Malt in Ireland under the no age statement category at the World Whiskies Awards for The Devil’s Keep to a coveted Master Medal at The Spirits Business Awards for The Brollach, The Taoscán has an award-winning pedigree. With awards, rarity and momentous releases determining a bottle’s investment potential, The Taoscán is destined for greatness. 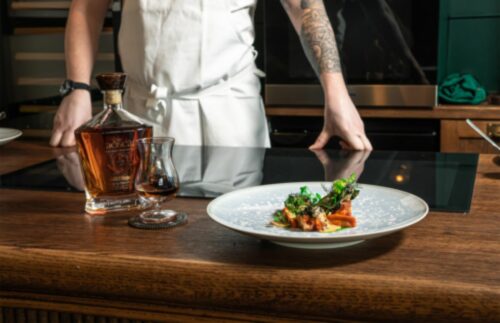 The Nose: Warm banana bread studded with candied walnut comes to the fore, joined by the rich sweetness of golden syrup and the mellow vanilla of a coke float, balanced out with just a hint of sourness.

The Palate: A rich spice travels through the mid-palate, rounded out with a smooth viscosity that engulfs the whole mouth with an exceptional creaminess. On the back palate, a slightly dry mouthfeel melts into an enveloping luxuriance with warming notes of vanilla, toasted nuts and the joyful memories of campfire s’mores.

The Finish: A medium to long finish of roasted chestnuts and a hint of spice calls to mind the warm embrace of home. 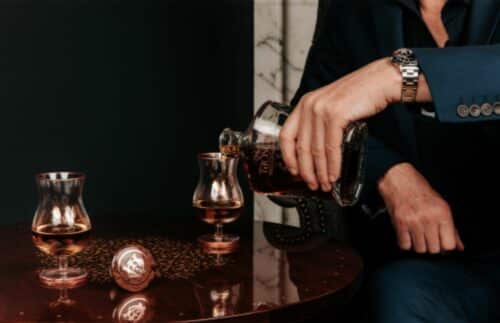 TOAST TO A WORLD-CLASS WHISKEY

This is not a whiskey to hide away in a dusty corner of the drinks cabinet. The Taoscán is different. This is a whiskey to take centre-stage and reclaim Ireland’s reputation as the global leader of the whiskey industry. Skilfully designed by the award-winning designer, Tiago Russo, The Taoscán offers every element for the perfect pour. The walnut wood stand and copper detailing draw inspiration from the cooperage of barrels. The Finn glasses are scientifically designed to enhance the whiskey’s flavours. The copper and glass pipette delivers the optimum droplet of water to release the full complexity of its rich notes. 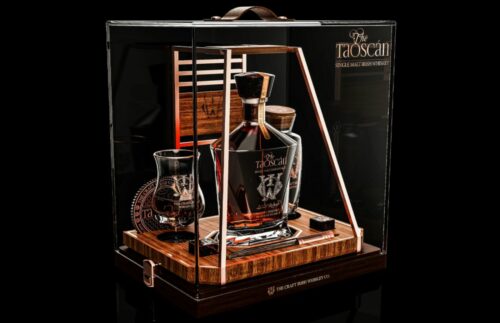 Just 1,000 bottles of The Taoscan have been reserved for the ultimate whiskey connoisseur and collector. Numbers 1-1,000, the first releases of The Taoscan, are presented in an elegant clear perspex and walnut wood box, highlighting the elegantly understated luxury of the design. An engraved label displays the number of your bottle, making this a collector’s piece to treasure.

The Taoscán brings the innovation and expertise of The Craft Irish Whiskey Co. to the world’s top bars and the whiskey collections of connoisseurs. It is a whiskey with a prestigious pedigree, a remarkable story and a bright future; it tells the tale of Irish whiskey’s rise, fall and rebirth. By reviving the whiskey-making art and restoring Irish whiskey’s reputation for masterful craftsmanship and a tailored approach to whiskey, The Taoscán is a world-class, unique whiskey.

Designed to offer the perfect single serve for the aficionado, The Taoscán’s rare whiskey is accompanied by a Finn glass, a copper and glass pipette, an elegant metal coaster, obsidian whiskey stones and a carafe of the finest Hallstein Water from Austria. These expertly designed accessories and carefully sourced accompaniments raise the experience of the whiskey’s rich, complex notes to a height demanded by the world’s first Tawny Port and French Chestnut whiskey. 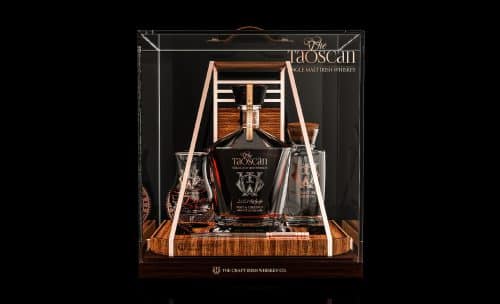 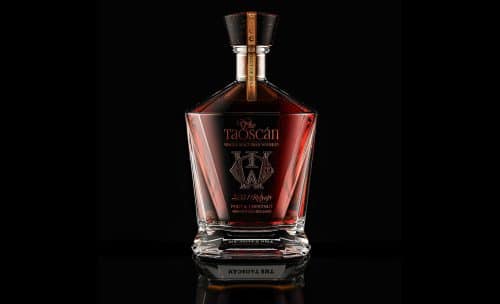 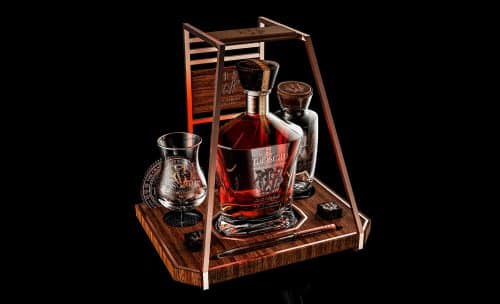 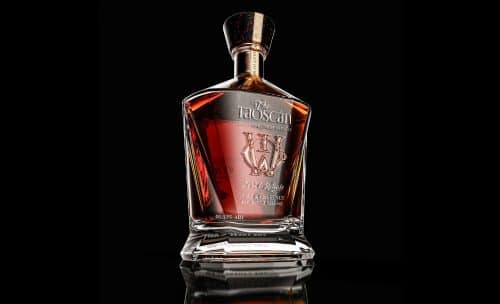 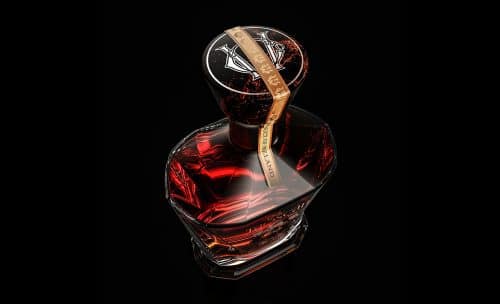