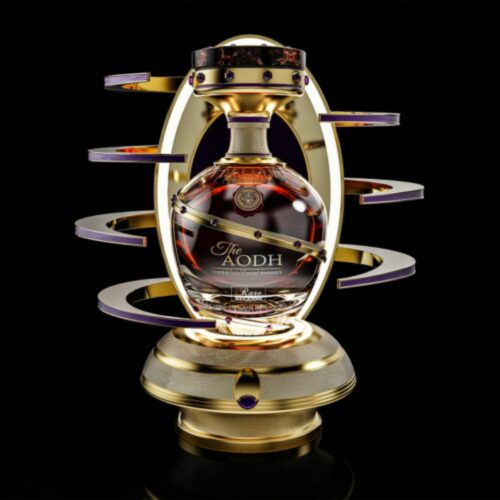 A whiskey of near-mythical rarity; a bottle of futuristic brilliance. A dance of cask, time and skill to craft a whiskey of daring character, presented in a bottle that draws on technological innovation to elevate and astound.

With only 88 bottles ever released, The Aodh, pronounced ‘The A’, is a never-to-be-repeated Irish whiskey of exceptional rarity. Drawn from two small, custom-built Sherry Oloroso barrels, one of 50l and another of just 40l, The Aodh’s rich, almost spellbinding depth, is the result of an unparalleled two years spent in these small finishing barrels. 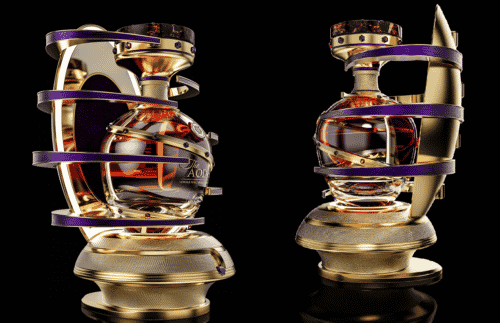 Innovative from every angle

The Aodh’s sinuous form takes inspiration from the legendary god of the underworld and eldest son of Lír, who also holds a place in Irish mythology as a captivating, hedonistic seducer. Just as Aodh was imprisoned in the body of a swan, so The Aodh is trapped in the exo-skeleton that winds its way around the bottle in swan-like elegance.

A layered, circular winged chassis locks the bottle in place, the royal purple and gold detailing offering a hint of the rare and regal liquid within. A subtle touch sensor on the base causes the arms to unfold in a fluid, graceful movement, freeing the bottle only to the favoured few.

Once released, the unique whiskey bottle design means it must be held in its case or passed between users, fostering an intimate exchange. Gold detailing, inset gemstones and frost cuts on the neck and base tell of exclusivity and desirability, drawing the eye and envy from all around. 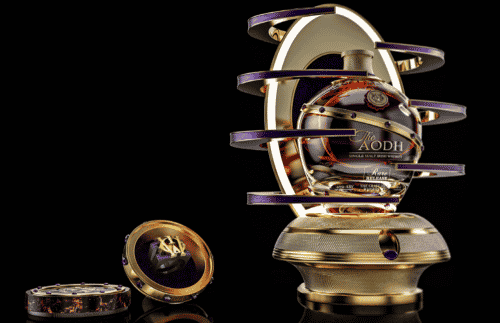 Transforming The Aodh from elite whiskey to future heirloom, the bottle conceals a secret compartment in its obsidian closure. In a groundbreaking partnership with a famed, trailblazing jewellery house, each bottle of The Aodh will feature a bespoke ring, numbered 1-88 to link with the bottle’s individual mark. This closure can be opened without disturbing the seal, allowing The Aodh to become an occasion in itself and making it a true one-of-a-kind. 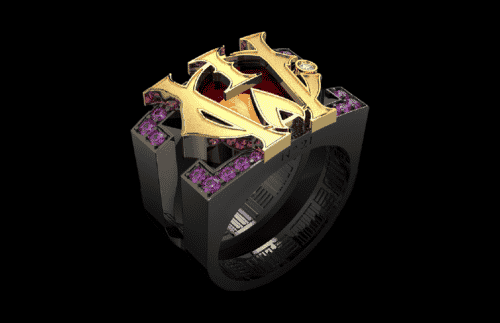 The unique ring is crowned with the iconic logo of The Craft Irish Whiskey Co., made in 18 carat gold to secure the hermetically-sealed whiskey capsule within. These elements are housed by a dual band crafted in silver and finished in the signature MJ Jones black armour, with the unique edition number engraved onto the side profile. The ring is completed with a halo of vibrant amethyst stones and a single natural diamond set within the logo of The Craft Irish Whiskey Co.

Just like The Adoh, each ring is cloaked in significance and meaning, representing belonging, legacy and purpose. A luxury statement for now, an heirloom for the future. 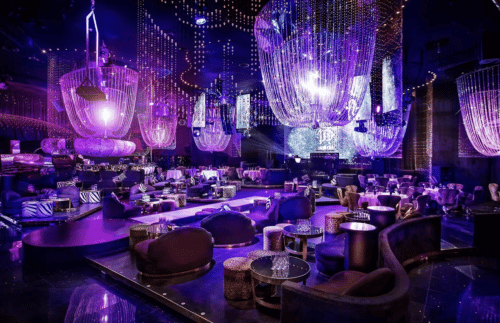 Membership of The Craft Circle also brings rare access to once-in-a-lifetime events that have so far included a three day yacht party, circuit-side, for the Monaco Grand Prix. Four weeks later, guests were invited to a two-day golf tournament with world renowned Michelin-starred and celebrity chefs at the most spectacular golf course on earth, the Old Head Golf Links. These events have already gained legendary status amongst insiders and having membership to The Craft Circle gets you access, amongst a host of other privileges. 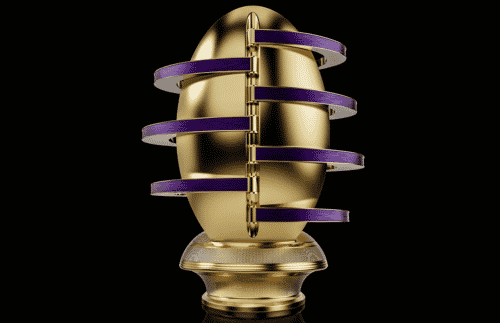 The Aodh has already made its mark on the world of design; in 2022 it was awarded a rare Limited Edition Award from the A’Design Awards. The Oscars of the design world, these prestigious awards are highly sought-after but only 35 Limited Edition awards have ever been given, making The Aodh one of the top three designs in 2022.

As well as being judged against thousands of other entries, the A’Design Awards then judge an entry against a company’s previous products, looking for an elevation of design. To have won such a coveted award, alongside The Devil’s Keep, The Taoscan, and The Emerald Isle, demonstrates an exceptional level of design excellence and innovation. 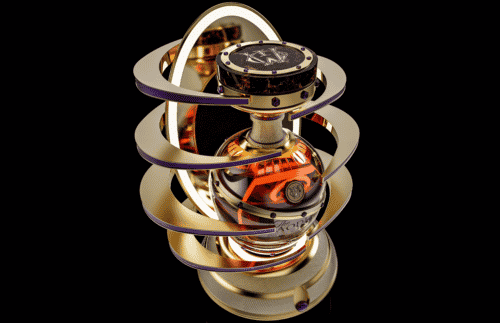 The Aodh’s two small barrels – no.1480 and 1481 – sat side-by-side in perfect conditions that created a magical synergy to produce a single malt whiskey of legendary flavour; rich, deep, dark, delicious. For a whiskey to spend so long in its finishing barrels is almost unheard of, but dedicating that time and expense has brought the world a luxury whiskey that defies convention. A whiskey rooted in mythology, of almost mythical perfection.

A Taste of Seduction

The Nose: A rich mahogany in colour, The Aodh captivates with a tantalising aroma of honeycomb and salted caramel ice cream on the nose, balanced with a hint of new cowhide, candied apple and orange peel.

The Palate: A silken touch from the first sip, with no ethanol burn to detract from the rich layers of flavour. An explosion of Vermont maple syrup on the front palate flows into the mid-palate where notes of leather and Belgian chocolate melt into a complex burst of dried fruit and warm spice on the back palate and a long, deep finish.

Mouthfeel: A seductive silkiness, reminiscent of a fortified wine, develops into a decadent creaminess on the back palate and delivers a perfect warmth to the chest.

They say that lightning never strikes twice but with The Aodh that’s exactly what happened. I was walking around the warehouse, checking the barrels to find our next release. Large 200L barrels were stacked one on top of the other, towering on either side. But as I walked past the spot where I’d discovered the magical ‘honey cask’ of The Emerald Isle a couple of years earlier, I spotted two small casks hidden away that I realised I hadn’t opened in a while. Interest piqued, I had them popped open.

These two small, 40L and 50L Sherry Oloroso casks were a revelation. The whiskey had spent its formative years in a Bourbon barrel but had been resting in these two casks for over two years. It’s almost unheard of to leave a whiskey in its finishing barrel for so long, especially casks this small – the evaporation and loss would have been significant. It’s perhaps not surprising, but with the pressure of building multiple businesses and with so many barrels under maturation, these two had slipped through the cracks. But this must have been fate – allowing them that time had created a truly magical whiskey.

Of course, nothing’s going to score as highly as The Emerald Isle – prior to The Aodh, that single malt was the rarest and oldest triple distilled Irish single malt in the world with a flavour profile that is perfection. And while The Emerald Isle remains the rarest, The Aodh is now the oldest triple distilled Irish single malt, and the second rarest. So when I tasted these casks I was transported back to that first taste of The Emerald Isle; here were two casks of whiskey that were as close to perfection as it was possible to be. Tasted individually they both scored highly, but I decided to blend them together and the resulting whiskey scored a 9.5, higher than any other whiskey, bar The Emerald Isle.

I played around a bit, trying to find the perfect ratio of the 40L and the 50L casks but oddly it was the entire contents of the 40L and almost the entire contents of the 50L that created the perfect balance of flavour. The result is an extraordinary whiskey, and certainly on a par with The Emerald Isle. But they’re completely different – the half-filled Pedro Ximénez cask of The Emerald Isle delivered a deep, dark, viscous whiskey with rich notes of leather and chocolate, but The Aodh boasts maple syrup, an unbelievably creamy mouthfeel and it’s also older than The Emerald Isle so there’s a musk as well. The combination makes it one of the most interesting whiskeys I’ve ever tasted, in a class of its own.

The two barrels offered up enough for 88 bottles, with a little left over for sampling. We knew a whiskey this rare and unique needed a bottle as groundbreaking as its flavour – it had to be The Aodh.

The Aodh’s design development was deeply immersed in mythology to create a unique take on the whiskey’s presentation.

The intention was always to create a product that would be held and interacted with. In the very early stages, we began to move away from a more traditional boxed display to one where the user would have direct access to the bottle, making it more visible to all around and more accessible, allowing it to be held, passed on from one to another and ultimately, appreciated.

The story of The Aodh became the embodiment of the soul and essence of this product. A God of Fire, Prince of the Underworld, a dark and powerful entity that was once captured and condemned to 900 years imprisoned inside the body of a swan. This ultimately represents every value we wanted to build into the product development; a powerful whiskey creation, where one of the rarest whiskeys on earth would be trapped inside a beautiful vessel, awaiting release by a select few.

An organic-shaped vessel becomes the language of a product of desire, where a fully rounded base means the user must hold the bottle; to feel its textures, to appreciate its beauty, shape, colours, weight and secrets, amongst a spiral of gold detailing and amethyst, transforming the bottle of a dark powerful spirit into a vessel of ultimate beauty.

To hold the bottle upright and display it in all its glory, an exo-skeleton structure was created where automated claws entrap the bottle, elevated by a domed structure that reflects and highlights the colours of the whiskey, the amethyst stones, and the richness of the obsidian closure.

Touch-activated, the lights turn on and the claws open sideways, creating a winged effect and allowing the bottle to be held. A two-part closure tops the dichotomy of values and contrasting design of The Aodh. The upper part of the closure, in a rich, dark obsidian, is a disguised lid that opens a secret compartment where a bespoke, exclusive piece of jewellery is stored: a detailed ring, entrapping a sample of the whiskey inside, constitutes the ultimate mark of one of the few owners and possessors of this mythical creation.

With only 88 bottles of this ultra-rare whiskey in existence, The Aodh is too precious to be entered into tasting awards. Yet, having scored a 9.4 on Jay Bradley’s scoring system it is already the highest scoring whiskey tasted, aside from The Emerald Isle. This places it above The Devil’s Keep, which was judged to be the world’s best tasting single malt when it won World’s Best Irish Single Malt at the World Whiskies Awards 2022.

But while the taste may remain reserved for just a small minority, the design of The Aodh is one that can be admired by all and the judges have already taken notice. In 2022, it was entered for, and won, its first major award, The A’Design Awards. Taking a Limited Edition Award placed it amongst just 35 designs in the award’s entire history and secured its place in the record books.

An undeniable triumph of design perfection and rare, expertly crafted whiskey, The Aodh is a never-to-be-repeated single malt of trailblazing character. From the innovative touch sensor lock to the elegant claws that unfurl to release their prize, this is an exclusive whiskey unlike any other spirit in existence. That innovative, rare distinction continues to the liquid; an ultra-rare single malt that embodies the skilled craftsmanship and groundbreaking methods of The Craft Irish Whiskey Co.

BE SEDUCED BY THE AODH